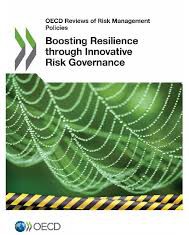 Chapter 1 discusses the rationale for increasing resilience against future disasters despite the financial constraints due to the economic crises in OECD countries in recent years. It shows that not only the frequency but especially the possible damage caused by disasters has steadily increased in recent years. In addition, many variations on social and economic factors are at the forefront of this trend.

Even if the resources are limited, investments in resilience are necessary because disasters can cause unforeseeable indebtedness, as well as causing major problems for the government, the business world and households. The chapter also indicates that high uncertainty undermines the making of good policies. This is because the ‘yield’ is not directly visible to the government, and is often only indirectly useful for businesses and citizens.

In chapter 2, the report evaluates the resilience of OECD countries as well as the success of measures to increase them. OECD countries are relatively resilient against major events compared to other countries. Much of this is due to economic and institutional progress. There is room for improvement, however. A number of institutional shortcomings prevent full acceptance of investment in resilience by public and private stakeholders. The strategic causes of this failure can be explained as a poor adjustment of the drives of actors, which has led to failed actions. The chapter proposes to address these shortcomings a framework.

Chapter 3 aims to emphasize a number of measures that governments can take to increase their own resilience as well as those of private and non-governmental stakeholders.

In a first step, this chapter shows that non-action is not an option and can even be very expensive. The same applies when a government is mainly reactive. A reactive approach often leads to the wrong investments and thus to a higher cost for society. The chapter provides advice to be proactive and to work cost efficiently. It also shows the importance of trust in the government.

Many governments have had to take very expensive measures in the past due to the loss of confidence caused by the economic crises.

Rather than losing confidence, crises should become an opportunity for governments that show long-term commitment and demonstrate a prospective policy. Transparency in shaping the policy also leads to trust. In order to increase transparency and accountability, citizen participation in the decision-making process of increasing resilience may be an option. Finally, it is important to actively manage conflicts of interest between all parties.

Some of the author’s opinions are:

–    Ensure the ownership of risks.
–    The adjustment to each other of the drives of actors.
–    Strengthen the role of rewards.
–    Facilitate the private sector action.
–    Encourage collaboration between all actors.
–    Increase the collection and sharing of risk information and use the benefits of ‘Big Data’.
–    Mobilize all stakeholders: public services, private sector, and citizens. Awareness is important here.