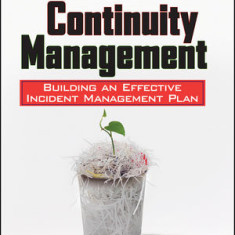 In this book the author works steadily towards his goal in the first three chapters: demonstrating the importance of Incident Management Plans (IMP), in addition to a BCP.

In addition, in chapter 4 he describes the inevitable: “what if?” Is the key question for some 40 cases, each of which is explained in text form, with chapters 5 and 6 providing the promising basis for the elaboration plans and questionnaires.

Chapter 5 gives the guidelines of the plans, in which there is a principle of a triptych: a first table is filled in to get an idea of ​​which (part of) the organization is involved. An outline of entity, place, time … Then the steps to take are taken: these have been drawn up as a so called “Guideline”, not to follow slavishly, but by interpretation. The third part of the guidelines forms the framework with suitable organizations / key persons that can be contacted.

The book also contains a URL with password, where you can find the English text of chapters 5 and 6 in a word document for further development tailored to your own organization.

The book is thus actually a book for doers, with, to a limited extent, an introductory theoretical exposition.

However, in terms of IMP for cybersecurity it has not been worked out enough (which I think could have been a separate piece). Other threats have been worked out. Some threats are becoming more and more relevant for affiliates in the USA and elsewhere with current climate changes. Other are more universal in nature.