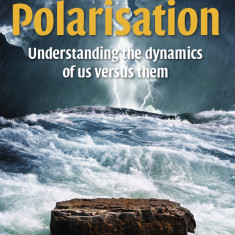 With many oppositions, such as in politics, but also at home, at school, in an association, … there are people who have a feeling to be attacked verbally (or non-verbally). Two camps are formed, each with a number of groups, which the author classifies in:

Each of them plays a role in a case of polarization.

The pusher mainly seeks his justification and power via one liners with which he tries to pull the mass of the silent to his joiners.

The bridge builder often tries to restore the harmony by working on the pusher with arguments, which usually amounts more fuel for the pushers and their joiners. He is usually not trusted, and often becomes the scapegoat.

There is, however, a method to break this vicious circle, based on four game changers:

–    Change target group: you do not have to concentrate on the pusher nor the joiners, but on the silent.
–    Change topic: find the underlying, often deeper hidden real reasons and goals of the dispute, and talk about it. This is very difficult, because if you hit the ball here, this is fuel for the pushers. However, it is the only chance you have to be believed by the silent.
–    Change position: speak from the group of the silent, in the middle of them, not from the point of view of the bridge builder. So also: show your own feelings in the case, be one with them.
–    Change the tone: you have to be truthful. The silent feels it directly if you do not believe what you stand for. In this respect, what the author calls mediative speech and mediative behavior is therefore an absolute necessity. If you ruin that, the polarization will explode in your face.

According to the author there is a strong intertwining between “big brother” polarization and “small brother” conflict. Both of them run together for a large part, but not entirely, so that polarization can always trigger a sequel after the end of a conflict.

This is the first book I know that appeared on the subject. It deals with the phenomenon of polarization in human language, so that everyone can understand it. It is a hands-on booklet laced with examples, even where things went wrong.

Attempting polarization is perhaps the most difficult aspect of human opposition. There should therefore soon be more objective reporting of cases, which are recognized as such, including the unraveling why it succeeded or why not to depolarize them.