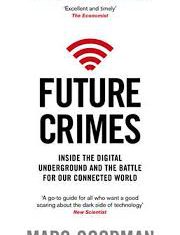 Author: Marc Goodman The author gives a tour in this book in a world that is online 24/7/365. It is about a new story of what can go wrong. And it is not an old wine in new bags. They are all new crime possibilities. Who is a potential customer? You ! What is a potential product that is traded in the crime world? You too ! Why? Because you have a laptop or a smartphone, or a credit card, for example. Or an e-mail address. Everything about us is interesting. Everything can be sold. Everything can yield money in some criminal context. Who can defend us? We ourselves must do that!
That is very briefly told what it is about. Now told more broadly. Chapter 1 begins with an unpleasant experience of Mat Honan. He was hacked by a teenager, for fun. But the damage was enormous. The impact of the first viruses on the world is also outlined. And the fact that citizens think they are safe, while the world relies on security software that is lagging behind. The influence on the stock market is regular and huge. And yet the world continues as if nothing is going on. Chapter 2 makes it clear that not only computers need to be the target. The security of public infrastructure is so bad that a fourteen-year-old teenager could hack a complete network of tram lines in the Polish city of Lódz with a self-built infrared remote control. Strictly speaking, most information networks are not of better quality in terms of security. The citizen is therefore not safe. What can be done with tram lines can be done with scada systems of water treatment plants, power stations, etc. And it is nice to know that all necessary knowledge for this and many other crimes can be found on the internet. There you will also find books such as The Mujahideen Poisons Handbook and the thick Encyclopedia of Jihad. But not only children and adolescents are criminals on the internet, the criminals as well as nation states play an important role. Chapter 3 makes it clear that the lawless have Moore’s law on their side. Because they choose where they attack and when, they can maximize the exponential growth of technology, while the defense line has to secure everything, which in the best case allows linear growth. This brings the author in chapter 4 to another point: the “good people” are often not a customer, but a product for the benefit of the criminals. Because they have a disease, or an e-mail address, or a credit card, or a car, or a job, or a smartphone, or a child, etc … And the crime is not far to find, even social media organizations such as facebook and Google or hotmail sometimes make mistakes with regard to the trust that their customers have in them. They do so by offering their services such as webmail, chat, storage space etc free of charge. But in reality they become owners of the data that people put on it, and can they trade it. Why can they do that? Nobody reads the terms of use before they sign it. Moreover, these conditions are written and formatted in such a way that they are almost illegible.

To tell all the chapters here would lead us too far. But what more can you expect in the book?

Crime happens on the deep web. You can install a TOR on your PC for that. That way you can buy the craziest things through the right social media there: weapons, drugs, child pornography, malware to measure, contract killers, extortion, …

But the question is, “What are the future crimes? Because we know all this already today “.

And how about hacking your domotics? Because so-called petty thieves must also go along with their time. And refrigerators that indicate that the milk box is empty, and place an order. Cars without a driver.

Or of plants that give light at night? Or single-celled organisms that are reprogrammed to make drugs. Or DNA technology used for data storage.

The problem of technology is that it is a double-edged sword. On the one hand it can be a blessing to mankind, but on the other hand it is a curse, once in the hands of the criminals. And crime is always on the front row to find applications for new tecnology, while governments are often on the last line.

In one of the last chapters, the author places an important responsibility with the citizens. They can not expect that the government can offer protection against everything. That is not realistic. That is why these last two parties have to work together. Crowdsourcing and gamification can play a role in this.