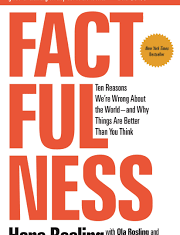 In this book the author tells about indicators about the world. He thereby asks the following thirteen questions as multiple choice:

These thirteen questions are better answered by chimpanzees with marked bananas according to a thought experiment. Even people who call themselves experts in a specialist field, answer wrongly in large numbers to questions about neighboring disciplines. Even the great leaders of the world systematically give wrong answers. The question is why. Because that is the question that can lead to a change. It turns out that we are people with at least 10 instincts that bother us. 10 is a large number. Which are they? This is explained in as many chapters, richly laced with examples and events from his own life and events in the world.