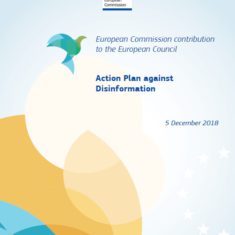 The starting point of this contribution is that free speech is a core value. The citizen must be able to have verifiable information freely. They need this in order to be able to correctly inform themselves about the wide range of political issues and positions. This democratic process is threatened when disinformation mixes things up.

What is the problem?

Disinformation is understood in this document as information that can be verified as being false or misleading. It is created, presented and disseminated for economic gain, or to mislead the public intentionally, and may cause harm to that public.

This is intended to include threats to democratic processes as well as public health, public safety, the environment or public security.

The action plan responds to the European Council’s question of measures to protect the Union’s democratic systems and to defeat disinformation, including the context of the emerging European elections.

An increase of targeted disinformation campaigns against the Union, its institutions and its policies,  is expected, in the run-up to the European elections of 2019. It uses deep-fakes (video manipulation) counterfeits of official documents, bots (automated software), trolls (false profiles on social media) and information theft. Also the traditional, classical, media continue to play a role. The tools and the techniques change quickly, therefore the response must also be done quickly.

Four pillars for ten actions by the Union in response to disinformation.

The Four pillars are:

Pillar 1: Improving the possibilities of the Union’s institutions to detect, analyse and denounce disinformation.

Action 1: To strengthen a number of Strategic Communication Task forces with specialized staff in data mining and analysis to process the relevant data. It considers also additional media monitoring services for the many language areas Europe has. In addition, we also need to invest in tools to process these data and conduct assessments.

Action 2: The mandates of the strategic communication Task forces for the western Balkan countries and the southern countries will be reviewed, also in order to effectively address misinformation. Member States should further enhance their national capabilities, including in terms of support for the Union with employees.

Action 3: A RAS (Rapid Alert System) is developed and put into use. This RAS should work closely with services from the Member States that are reachable 24/7.

Action 4: An increase in communication efforts on the values and policies of the Union, with a view to the forthcoming European elections. The Member States must also make this effort.

Action 5: The Commission and the High Representative, together with the Member States, will strengthen their strategic communications in the Union’s environment. This is done among other by sharing information, sharing in the lessons, raising awareness, proactive reporting and research to strengthen and share information.

Action 7: In the longer term, targeted campaigns will be organised for the wider public, as well as training for the media and opinion-makers in the Union and its environment. This is aimed at facing the negative effect of disinformation. Efforts will be taken by independent media and quality journalism as well as the investigation of disinformation to provide a comprehensive response.

Action 8: Member States together with the Commission should provide teams of multidisciplinary independent fact-checkers and researchers with specific knowledge of local information, to detect disinformation campaigns on, among other, social networks and digital media.

Action 9: Actions will be taken on the media literacy of the public. Member states should also make rapid use of provisions of the Audio-visual Media Services Directive.

Action 10: Member states must ensure an effective follow-up of the ‘ Elections Package ‘, in particular the ‘ Recommendation ‘. The Commission will monitor this and provide support and advice where appropriate.