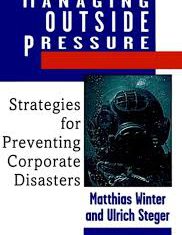 In Chapter 1, the authors offer a historical statement of the Nobel Prize Laureate Economy Friedman from 1962: “In a free society, there is one and only one social responsibility or business – to use its resources and engage in activities designed to increase its profits so long as it stays within the rules of the game, which is to say, engages in open and free competition without deception or fraud.” With that, organizations became dominant in society. But more and more people believe that today the same organizations are causing much of society’s problems. This creates groups of activists and they start to exert pressure. A number of questions follow from this:

The authors provide answers to these questions in the course of a number of chapters.

The “Stakeholders” can be an extensive number of groups: consumers, customers, competitors, employees, shareholders, environmental organizations, local communities, local authorities, suppliers, special interest groups, owners, the media, the legislature, scientists and researchers, banks, … they all have an interest somewhere in the results and the operation of the organization.
These can be divided into two groups: the transactional environment and the contextual environment: the first has some professional business relationship with the organization. Normally they can negotiate with the management about the rules for the transaction. The contextual environment has no direct market or business relationships.

There are also activists: these can be loosely classified into environmental activists, health-related activists and socially motivated activists. That way they are mainly in the contextual environment. How can they influence an organization? The authors describe this with “Transmission belts”. The first is direct pressure of protest. A second is the search for associates in the transactional group, for example the customers. This impact can cause the organization a financial hangover. They can also find supporters in the contextual environment, for example with the legislator. They can best use both, since the clients can work flexibly in the short term, while the legislator works more decisively with regulations but more in the long term.

In chapter 3 the authors talk about “Corporate Early Awareness Models”. They state that the traditional model of the stakeholder analysis is outdated. After all, a number of things vary over time: the agendas of the various stakeholders, the importance and influence of different groups, how the organization behaves in the sector, and social values. The new analysis models try to make the difference between early identification versus a late intervention. One advantage on the first is that you can avoid the difficult things so that they are no longer relevant. The second means that you as an organization do not waste time and energy on what is not relevant. In addition, it is good to make a distinction between strong and weak situations. Strong situations are best identified early, while weak situations can usually be dealt with later on. The strong situations run the risk of going through the following stages:

Because it can become a “scandal”, it is necessary to intervene quickly. Weak situations do not usually reach this final stage.

To make a difference between a “strong” and “weak” situation in a systematic way, the tool has been proposed by the authors, from the perspective of the organization. This covers the following eight sections:

To complete their “world view”, however, the organizations also need a picture of the situation through the eyes of the activists. Which factors make the situation “attractive” for them? And for which type of campaigners? For this, the authors brought the activists into four groups along two axes. First: integrating versus polarizing. Do they integrate the role of the business and the public interest in their own system of objectives or not? Integrators place a high priority on developing a productive win-win relationship with the business, while the polarizers simply push through their minds and do not cooperate with the organizations. The second axis shows whether the action group discriminates between organizations within an industry with regard to a genuine or perceived commitment of the organization to environmental issues, health issues or social issues. “Discriminators” look at the progress of the organizations with regard to benchmarks in their sector. The non-discriminators focus on the problems that the organizations and entire industries cause, without distinction between the good guys and the bad guys. These four groups have their own modus operandi.

The authors’ research shows that most activist groups, but especially orcas and dolphins, have a collection of guidelines for when to engage in a situation.

When a situation meets the requirements of this or a similar list, the danger of a confrontation increases:

In chapter six the authors give a number of tips and examples of the application of these checklists. A possible template for a signal description of an upcoming issue includes a place for the following questions:

In Chapter 7, the authors present nine cases of issues that occurred, or were to act potentially in the near future at the time, arguing that the model works.

In chapter eight, the authors indicate that the organization always has the choice between two options:

In addition, they provide advice in both cases.

A possible template for these tools can be found in the attachment.