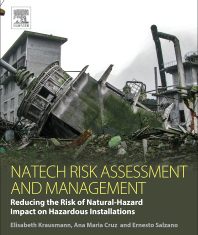 Authors: Elisabeth Krausmann; Ana Maria Cruz; Ernesto Salzano
The problem that is currently on the rise is that of technical disasters triggered by previous natural disasters or natural events. Examples include frost, heat, drought, rainfall, floods, earthquakes, whether or not combined in tsunamis, lightning strikes, etc.
In an extensive introduction, the authors give a number of examples of what these natural phenomena can do. And that is quite something: ranging from power cuts and pipe breaks, to destruction of storage tanks and explosions. These in turn give rise to an evacuation of the employees of the company, the environment, with or without death toll, as well as a possible enormous economic damage and the stagnation of (parts of) the economic activity in the affected area. It is therefore not for nothing that people want to arm themselves against the even worse domino effects of such events. To this end, these so-called Natech events are studied. To make the world a little safer.
Unfortunately, no two Natech disasters are the same. Although performing risk assessments makes progress in this regard, according to the authors, it remains (for the time being) an impossible task to compare the results of risk assessments. That makes it difficult to prioritize. Yet there are some standard works that the authors regularly refer to, among many other things in their detailed literature lists. Namely the so-called purple book, red book, green book and yellow book from TNO. But perhaps more important for their discussion are the software packages RAPID-N, PANR, the methods of TRAS 310 and TRAS 320, risk curves and ARIPAR-GIS. These contain qualitative, semi-quantitative and quantitative risk assessment modules.
After a number of chapters in which RAPID-N, ARIPAR-GIS and RISKCURVES are illustrated with discussion of the results, two chapters deal respectively with structural (technical) measures and organizational (more administrative) measures.
An innovative framework, which the authors say is worthwhile, was proposed by IRGC and consists of the following five elements:

The work is, in particular, a piece of “compulsory” reading material for continuity managers and risk managers of large companies that are important for the economic motor of a region or country with large industrial installations. It requires a healthy portion of common sense, but also a sufficient knowledge of process engineering to grasp the storylines. In addition, an open view of a wide range of sciences, technical and non-technical, and of society, is necessary to correctly assess the importance of this work. 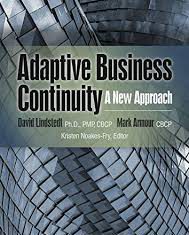 Authors: David Lindstedt; Mark Armor
Adaptive Business Continuity wants to blow a new wind through the BCM world. To this end, they throw, among other things, the BIA and the risk assessment overboard. When I read the arguments why they do this, it’s not clear why. After all, if I read the authors’ arguments in Appendix B (the manifesto), then there is the following in B.5.1 page 154:
“Adaptive BC discourses a sequential approach. Continuous value, coupled with the core mission of continuous improvements in response and recovery capabilities, leads to the adoption or a non-linear approach that adjusts to ongoing feedback from all participants. … “.
The manifesto in https://www.adaptivebcp.org/manifesto.php also states that things are becoming increasingly complex:
“How long can an organization without a particular service almost always depend on an integrated combination of factors too numerous to identify and too complex to quantify. Moreover, the changes that result from the exact timing and actual impact of a disaster on a service will dictate different judgments about applicable recovery strategies, priorities, and time. Definitive changes to a service’s holistic “ecosystem” cannot be foreknown. ”

Nobody can deny that the problems are becoming increasingly complex. However, it can be denied that linear problems no longer occur can be denied. That is why I would like to look back at the picture of the full spectrum of possible disasters. I tried to discuss this in a previous blog, at http://www.emannuel.eu/en/artikels/resilience-strikt-genomen-disaster-management-red-ants-gray-rhinos-black-swans-de-verhouding-van-bcm-risico-management-rm-en-crisis-management-cm/ in question 6: 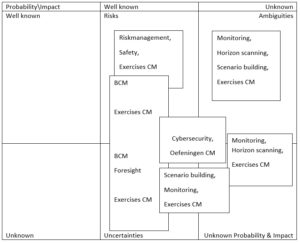 However, when I get the idea of linear issues, difficult or complicated issues and complex issues from the article of http://www.emannuel.eu/en/artikels/herhaalt-de-geschiedenis-zich-of-niet/# then I come to the next figure: 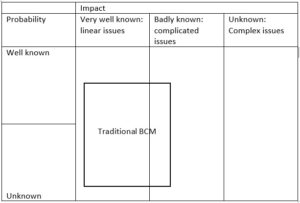 I believe that Traditional BCM has a linear approach. This is extremely suitable for linear issues and systems with a (well) known impact and linearisable systems from the complicated part of the spectrum. The question that remains is whether the arguments of the authors are clear enough to put this linear approach aside. This I deny: the objectives of Adaptive BC are not clearly defined enough to throw traditional BCM overboard here. After all, no arguments are given. The BIA simply refers to an article by Rainer Hübert, the authors of which do not reflect the line of thought.
Mutatis mutandis, I think the argument to drop the risk assessment is a non-argument.
After all, they write:
“Administering a proper risk assessment and implementing the resulting action items may necessitate deep knowledge of actuarial tables, information security, insurance and fraud, state and federal regulations, seismological and meteorological data, and the law. Typical continuity practitioners do not possess such deep kn owledge; those who do are most likely specifically trained as risk managers. Adaptive BC practitioners as such should eliminate the risk assessment from their scope of responsibility. ”
I do not agree with this: a BC manager does not need to be an expert in all these matters. Rather, he / she must be able to know the right experts within the company, gain their trust, facilitate and coach them in order to achieve results. Then making a risk assessment is not hopeless and not unusable. I leave the criticism of the readers to judge a lot of other claims to the detriment of traditional BCM: it is clear that the authors are trying to declare the traditional BCM dead for reasons they unclearly articulate.
Has the Adaptive BC depreciated for me? No, not at all. Because they offer an answer to issues from a different part of the disaster spectrum: possibly, provided that they have a solid foundation, a solution can be distilled here for complicated and complex systems where I think traditional BCM has a harder time answering as follows: 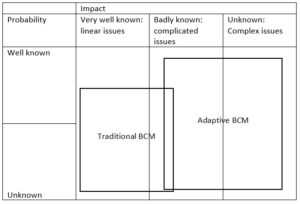 So in my opinion, the time of traditional BCM is not over as long as there are linear issues. In addition, Adaptive BC will have to develop further into a more mature activity, which can claim its own part of the spectrum of disasters, together with monitoring, building scenarios and future scanning. But next to Traditional BCM. Not instead of.
So there is still work to be done.