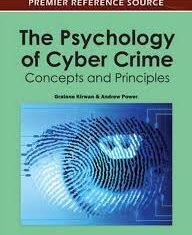 The authors have set themselves the goal of bundling a number of ideas about the psychology of cyber crime. However, this is not easy, especially because it is not so simple to define cyber crime as an overarching container concept. They try to do that in the first chapter of section 1 (Introduction): “Creating the Ground Rules: How can Cybercrime be Defined and Governed?” The term covers a wide variety of thefts, private issues such as disputes between buyers and sellers, and all kinds of anti-social behavior. The definition they work with becomes “any activity occurring online which has intended negative consequences for others”

A first category are crimes that already exist offline, but are now facilitated by the internet. Examples are bank card fraud, theft of information, blackmail, obscenity, money laundering, etc. A second category are new crimes that did not exist before working with networked computers. Examples are hacking, denial of service, distribution of malware, …

A third category comes to mind when computer users start using online Avatars. This can be, for example, the harassing of someone online, which then continues offline.

The government can respond to cybercrime through laws; a response can come from companies with, among other things, a practical code of conduct, a technical response or a user response.

Because the internet is growing in terms of the number of users and the number of hours per user, we can speak of a term such as “cyber citizen”. That means there is a need for a framework of laws, rules and guidelines to keep order online.

The next question is “Can Forensic Psychology Contribute to Solving the Problem of Cybercrime?”. This determines the issue in Chapter 2.

Forensic psychology as a concept is well known to the general public through television series. But they provide a distorted picture. So the first question is “What is Forensic Psychology?”. In this work the broad definition is chosen that states that “forensic psychology is a combination of legal psychology covering the application of psychological knowledge and methods to the process of law and criminological psychology dealing with the application of psychological theory and method to the understanding ( and reduction) of criminal behavior ”. The authors also assume that “it will be considered to include any way by which psychology can be of assistance at any stage in the criminal justice process.”

Tasks in which forensic psychology is involved are the assessment of offenders with regard to psychological disorders, the punishment, rehabilitation and the associated risk assessment. This includes interviewing suspects and analyzing eyewitness accounts. And ultimately also profiling offenders in criminal investigations.

Chapter 3 continues with the question “Can Theories of Crime be Applied to Cybercriminal Acts?”.

After all, theoretical explanations of crimes can help society understand how and why crimes are happening. But it also helps predict future criminal behavior. In addition, the insight provides a basis for successful rehabilitation strategies, as well as preventive strategies. There are different types of theories:

Such theories can then (perhaps) be applied to cyber crime. Important in this are:

I summarize a few things about these two sections in this Excel sheet:

This is not so much about pure crime over the internet, but about crimes against people, who, among other things, present themselves as avatars. Chapter 12 asks the question “Crime in Virtual Worlds: Should Victims Feel Distressed?” This includes property crime, such as theft of property, but also crimes against persons, such as their avatar, including rape, stalking, etc., which can also continue offline. The question of police action and preventive action is addressed. But there appears to be mainly anecdotal data, not so much a large mass of empirical data.

Finally, Chapter 13 deals with “On-Line Governance”: what is needed in online government, what else is needed, how do political tendencies emerge, and how has “Second Life” been important in the past. But also: is a “Virtual Government” an added value? ”. Or should the government stay away from the Virtual World? E.g. because it is hopeless, or even unwanted?