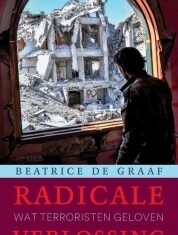 What is it that terrorists believe? That is the key question that Beatrice De Graaf addresses in this work. With this work she lays a foundation for further approach and study of the phenomenon of terror.

First of all, the source material: the author obtained her data from direct conversations with (former) detainees, from legal writings and the like. From this she distills a ‘grounded theory’, namely the theory of radical redemption, which I try to briefly outline here.

There are a number of enabling conditions – a five-step process – that can play out very quickly as follows:

The idea that stays with me is that the majority of the interviewees were actually looking for creative meaning with that redemption. And that sounds odd to me. Hence the beginning of the work caught my attention strongly. The author first indicates what normal people can understand by creative meaning. An example is that of a person who has been through a lot and decides to fill his existence with services to his fellow man. For example, helping the children of the neighbors with their studies and helping them with a diploma, which would have had little chance without any help.

Mutatis mutandis, (some of) these interviewees try to give meaning to a life that was going in the wrong direction. For example, someone who had set up illegal trade, or who kept his life empty with drug use. Yet one does not really speak of destructive meaning. In their eyes they started to kill two birds with one stone: to purify their own souls, by sacrificing themselves for a struggle with a noble, higher purpose. But a number of those who survived ended up in a disillusionment with the latter. The final battle did not come any closer. They did not like the behavior of Muslims who fought against Muslims,…

The latter, of course, in no way justify the deeds committed.

The advantage of the conducted study is that it provides hope for a number of ‘cases’. This can be done by encouraging sobering up where possible. After all, it appears that redemption cannot be achieved just like that if the supporters of the combatants do not give them support. Furthermore, it also helps if one’s own people, such as family and community, do not ‘drop’ them as scum but stay in touch with them to welcome them when they decide to return and face the reality they have created. So continue to be there for them, but not give support for their actions.

However, there are a number of preconditions.