Corona times are special times. Nobody can deny that now, except for possible total deniers. And in English they say: “Desperate times call for desperate measures ” (Said to be words of Hippocrates). When this is said, it means that actions that seem extreme may (under normal circumstances) be appropriate in times of adversity and calamity.

The real problem is in the word “may”. After all, even in times of calamity, support is needed. And how do we measure support? I previously wrote about a tool that I created to make a visual assessment of the support for actions by governments, namely at the GDPR and at Brexit .

However, these were only two cases, so now I am trying out the (now adapted) tool on the measures for the population of the province of Antwerp . Actually it is wrong from the beginning what I am doing, because for a balanced answer I would have to conduct a survey among a relevant number of citizens . But I avoid this error by stating that this is my opinion, a personal assessment of the situation. Based on indicators that I created based on other cases. That presumption goes as follows:

Legitimacy: The province of Antwerp makes use of the legislation and works together with jurists from various government agencies. The legitimacy of a number of actions is disputed, but the complaints do not currently seem to be of the heavy caliber and appear to be rebuttable. Score: +

Cohesion of the target group by proximity of the issue to the target group: The actions are strongly felt by the population. People ask themselves whether that ban on fun shopping really should be, because shopping should still be fun … In the street scene, I hear various sighs. But most seem to think negative when someone has no intention of wearing his on the bus, but there is no one reprimanded by fellow citizens. When does the wrong thing, it remains a matter for law enforcement. Score: o

Effectiveness : With the latest results viewed day by day, it seems to be going in the right direction in Antwerp hospitals. The fact that the measures are largely the same throughout the province also seems to prevent population shifts. As well as preventing the potential infections that go with it. Score: a cautious + subject to the trend continuing.

Targeting: There are of course entirely – deniers even the existence of covid-19 deny yourself. There are also machos who do not take the advice of the elbow strike seriously, and who absolutely want to shake hands. It turns out that quite a lot of Bart De Wever’s also eat in the restaurants and taverns. However, the majority of the population takes the measures seriously. Measures such as testing and tracing will be fine-tuned further. But is there more to be explored than enforcing the rules, or are there also alternative options? Score: o.

Efficiency: The PCC Antwerp (Provincial Crisis Center) runs on very flexible people, and the population has also shown itself to be largely flexible. For example, there was an emotional urge among citizens to want to wear a mask, despite original dissuasion. Now a mask is required all over the province, and citizens have agreed. Score: +

Perseverance: The PCC Antwerp team ‘goes for it’. The members contribute topics themselves and give their opinion freely. This criterion is more difficult to assess for citizens. But with the slightest weakening of the measures, a whole lot of freedom was taken. As a result, by wanting to be too social as one of the factors, it could be that this flare-up was increased. Score: –

Leadership: People should look up to experts. And there are indeed many (types of) experts involved. Not only masters in their field, but top people from universities. Some of them have been burned in the eyes of a number of the civilians, but the same citizens seem to be looking for whom they do want to trust as experts. Furthermore, the governor himself is being looked at: we have to wait and see how she will come out of this battle. Score: ++

Internalized: There are things that have been shown to work in the past. However, is the citizen motivated to comply with the measures, or are loopholes to be found quickly in the new measures ? That is still unclear at the moment. That is why I leave this score blank: blank.

Reputation: The question here is whether the citizens has a good or bad feeling in this situation in all its aspects and whether they are on an individual level involved. That also seems unclear to me at the moment. That is why I leave this score blank.

In summary , the score in the tool will look like this: 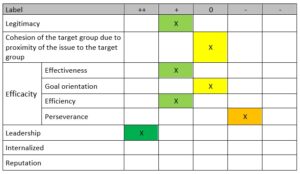 Conclusion: I feel that the situation is largely supported by the population of Antwerp, although much may depend on the results in the coming weeks. The situation should be reviewed anyway after the period of 4 weeks that has been set, or after serious interventions that would occur.