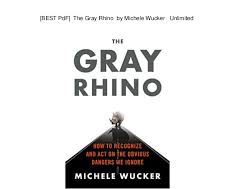 In this book, the author tells about things that are uncomfortable. It is not about “Black Swans” but about “Gray Rhinos”. What is the difference? Where black swans are very popular as events with a small probability but huge impact, gray rhinos events that are common, have a big probability, and have a huge impact. Where black swans are difficult to predict, or totally unexpected, gray rhinos are often seen on the horizon. But often people choose not to (want to) see them.

So there are some questions that we can ask, on which the author argues, such as “What are examples?” and “When should we respond?” And “Why do we ignore them while the costs and consequences are self-evident, and often greater than we even think, and that while we know this? ”

The author tries to answer these questions by analyzing the stages of gray rhinos events. These stages are: prediction that elicits denial, denial, muddling, diagnosis of the situation, panic, action, and post-treatment “because a crisis is a terrible thing to waste”.

A very important advice from the author is: think long term.

But the most important take aways of the book are in the last chapter: in that chapter the author gives a “Gray Rhino Safari Guide”. These are a set of principles to deal with the stages of the gray rhins, so “How to Not Get Run Over by a Gray Rhino”. These are:

1 ° Recognize the rhinoceros. Recognizing the existence of gray rhinos is a step aside when it comes along. But more than that, that’s why you can learn to see problems differently and transform them into an opportunity. So dare to ask uncomfortable questions. Hear, see & speak no evil is not a good idea.

2 ° Define the rhinoceros. After some practice you recognize a number of rhinos. And that can be very intense in itself. You can not take all problems into account at the same time. So you have to prioritize. But for that you have to define a scope of each rhino. The way you do this is important to let people respond.

3 ° Do not stand still. If you can not work out the big things you have to do in one step, do it in smaller steps. You may muddle on for a while, as long as this muddling helps you on your way to take action. If possible, make a plan in time. For example, on a personal level, you can change your seatbelt when you drive a car. Not every ride leads to an accident however, but it is always possible. Preparation is the key to success.

4 ° A crisis “is a terrible thing to waste”. Sometimes you can not get out of the way of a rhino and you will be trampled. Then it is important not to lie down but to get up, to carry out repair work, and where possible also to make improvements with respect to the old situation.

5 ° Stay downwind. The best leaders respond to a threat if it is still far away. Because they know that the costs and the chances of impact only increase with procrastination. In doing so, you must distance yourself from group thinking and other bias mentioned in the book. Unfortunately, not everyone follows president Kennedy’s advice “It’s time to fix the roof when the sun shines”.

6 ° Be a rhino spotter, become a rhino keeper. A person who sees a (obvious or not) great danger coming to the organization, that is ignored by others. Someone who speaks out loud when others are silent. That is where the first step to success begins. Then you have to get others to come along. Identifying a need is one thing, but the hard work lies in convincing and executing appropriate actions. You must therefore dare to go against the crowd. So you have to be a bit mad. But also courageous. Because it often requires a sacrifice of yourself. 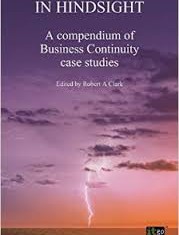 Edited by Robert A Clark

In Hindsight reflects on a series of disasters from a BCM perspective. Some organizations have scored good, others did not. Five organizations were not prepared and did not make it. A sixth has made it thanks to an extraordinary portion of luck. Some disasters had extraordinary proportions and global consequences. Others stayed local. The causes vary, from brutal bad luck like acts of God and accompanying volcanic eruptions, to things that could be prevented like the Herald of Free Enterprise, in which somebody is clearly to blame.

Other causes of human nature are lack of insight or poor management, profiteering, stupidity, terror, … All these things have in common that they are in the environment of many organizations.

This diversity of topics makes the book very suitable as an eye-opener for managers and boards of directors.

The penultimate chapter also emphasizes the importance of small sparks: fraud, cyber attacks, employee dissatisfaction, the media, small and large fires, including those of the neighbors, poor planning of major projects, breaches of information security such as data theft, floods, diseases, etc.

But the final message, perhaps the most important, is in a quote from Vince Lombardi, a former American football player, who said: “It is not whether you get knocked down; it’s wheter you get up “. And that requires preparation.